Every resumé you’ve ever submitted, I wrote for you. It was my neat teacherly script on the job application. You got those positions and stayed for as long as it took for them to figure you out. Remember the janitorial job? You collected recyclables at my mom’s office, pushing that cart around in front of you, indignant at the desk workers who couldn’t be bothered to reach six inches past the garbage can to the paper waste. You brought so many things home those days. That mountain of paper towel dispensers that were bound for the dumpster, they ended up in our back yard, black and piled up like riot gear. You promising that inside each one were parts I couldn’t see, couldn’t even begin to imagine the uses for.

The day your tweaker best friend threw flyers in the parking lot of your work place, your manager gently, but without hesitation, told you that it might be best for you to deal with your problems rather than come to work anymore. Tweaker Friend also papered our home with those same flyers: a photo of you, cheeks sunken, a five day shadow across your face and a glass pipe photo shopped between your lips. Got meth? they asked, my shame and surprise spreading a slow burn up my neck and face when our sweet neighbor knocked on the front door with a pile of them, chaotic and crumpled in her arms, “I think I got all of them.”

You told me years later that to smoke meth at work, you would lock yourself in the supply closet, stand on top of your cart with a plastic bag, breathe the toxic smoke into it and hold it directly to the air vent. It was one of many rituals you had perfected in hiding your world from me. To smoke meth on our family vacation, you told me you drove our Volvo sedan to an empty parking lot and climbed into the trunk, folding your 6’3” body into thirds. Why the trunk, I asked, like anyone would ask, and you said it was of the utmost importance to not be seen, not even the small spark of lighter could be discovered. By who though, I pressed, imagining you in the dark rectangle of our car, inside the square of the parking lot’s vacant rectangles.

I never asked the right questions, I know now. And I forgive myself because it is an addict’s only job to keep their affliction hidden. To keep wives and daughters and mothers loose on their feet—confused—as long as possible.

You weren’t savage enough for car sales. That was your first job application filled out in my hand. Because you grew up so poor your family ate potatoes for weeks at a time and everything you had came from someone else first, you couldn’t bear to press someone into a car they couldn’t afford. And because we were newly married and poor ourselves, building our small household from yard sale items and passing our food stamps to grocery store clerks in the middle of the night when no one would see us, you had to push customers into an unaffordable loan often enough to not lose your job.

Crawling through ducts working HVAC came next, then cell phone installation. This is where you first met Tweaker Friend, but he wasn’t that until later. At first it was perfect. The only job you’d had that didn’t harm your body. Back when cell phones were kept in briefcases and it was a sign of real wealth to have one in your car. The elderly came in asking for “celery phones” and for the first time it seemed like you might stay doing the same thing for a while. We went to your company party in Reno. It was the first time we left our 18-month-old overnight. My breasts were bursting with milk at the Benihana. Remember how you and your coworkers snuck me, not yet twenty-one, into the back of that country bar? I sexy-danced with a cactus. The baby was weaned after that trip.

This was when you stayed out late, which seemed normal, though not preferable, because we were so young and because your work pal was always down to play. I was going to the community college and would ferry our toddler to the child development center where her favorite teachers were the two men—one who wore a leather top hat, and the other a folksinger drumming up gigs at kid’s birthday parties. I was hung over too those days—the nights you stayed home, I went out. In kind. Tit for tat. Exhausted, I would take naps on my belly in the sun, grass impressions marking my face like scars.

But it wasn’t until the next job, the job before you were a janitor that the true trouble began. You wired houses for home theaters and security systems. And though you had always been meticulous about your work, now you were impossible to please. There was a better way to do it, you would lament to me, describing the fight you’d had with your boss who had found you at a remote job site, pacing in circles, writing and rewriting schematics. Later, after knowing, I understood this story for the harbinger it was, but at the time it seemed that you were misunderstood and odd and brilliant, and I wondered if there would ever be a place for you in the world.

Before everything was hard, before we had a home and a child between us, you had just graduated high school and I was almost a senior and we were in love. You were working as a field flagger, a job you got on a handshake, no need for a resumé or application. You spent the long, early summer days waiting for the sound of the ag planes carrying loads of fertilizer and pesticides, running the lengths of the fields. I didn’t understand the geometry you were marking, whether it was to make a boundary or to align their drop. One week, you worked over ninety hours and I begged you to quit the job in the few moments we had together at the end of each day, unused to you being consumed by something other than me. You could barely keep your eyes open while we talked, my head on your chest where the heat of the day rose up from your skin.

Years later you described how one person would stand at the end of a field and another directly across, each holding a flag pole with a long piece of white fabric. The plane would get as low as possible and drop the chemicals in the imagined line between the two. You were reprimanded for not crouching down when the plane flew over your head. Instead, you stood looking up with a kind of wonder. Things that scared others never alarmed you.

I thought about this job after you left and the flyers arrived in the arms of our neighbor, the image of your face drawn and ghostly. There were so many of you looking back at me as I combed the street for what was left. I wanted to remember you as young and strong, how your body was a conduit for labor so subtle, it existed between the echoing descents of small aircraft. I imagined the flag sweeping the air in a figure eight and wondered what song had been playing on your small radio. I could see you running to the next invisible line, a parallel figure running the same distance with his own white flag waving, inscribing the land with chemicals that could kill or make something grow, depending on what land you were crossing. 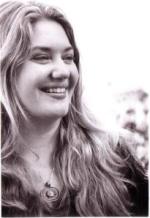 Sarah Pape teaches English and works as the Managing Editor of Watershed Review at Chico State. Her poetry and prose has recently been published or is forthcoming in: New England Review, Passages North,Ecotone, Crab Orchard Review, The Pinch, Hayden’s Ferry Review, and others. Her chapbook, Ruination Atlas, was published this year by dancing girl press. Follow her on Twitter @sarah_pape.