Line the stem-butts even in your fist. Strip

leaves, red as a sorrel stud, from stalk with thumb

and first. With the three less nimble, squeeze

leaf butts tight and if the codger hired off-the-books

grabs a squeeze of your 18-year-old butt, ignore

him. He’s bored and trying to get a rise.

When your fist is full, choose the tie, a leaf flimsy

as a silk scarf. Fold it skinny, wrap the butts tight

as you can, tuck the tip between the leaves.

Sling the crotch you’ve made astride the stick

wedged into the hole cut for it in the bench. The hand,

skirts flying like a witch in the wind, will ride

until it’s a coven of a dozen, sentenced to the press

to discipline those skirts flat and tidy for the market. 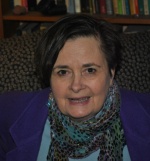 Sherry Chandler has published four collections of poetry, most recently The Woodcarver’s Wife, which has been described as “quaint but smoldering”. She has a BA from Georgetown College and a traditional MA in English literature from the University of Kentucky. Her work has received the Betty Gabehart Award for poetry and three nominations for a Pushcart Prize. She has received financial support from the Kentucky Arts Council and the Kentucky Foundation for Women. She lives on a small farm with her husband, the woodcarver TR Williams.