I was in the ninth grade, the only black girl in a classroom of white peers, when I learned the truth about slavery. At the time, I thought I knew all there was to know. No fault of my mother’s; she just didn’t have the heart to tell me the whole truth, that we were beaten and bullied and belittled by people that looked just like my best friends and their parents.

The video lasted most of third period. When it finally ended, we were silent. Nobody wanted to be the first to speak after watching and learning something so horrific. My history teacher, a white woman who up until then was one of my favorite teachers, turned off the TV monitor, turned on the lights, then turned to look at the class.

To look at me.

“How did watching that make you feel?”

The question may have worked, if it had been asked to the class. It could’ve been an opportunity for us to all reflect and grapple and lament. But instead, the question was asked only to me. Only the black girl was expected to feel something after watching white people beat and whip and kill black people.

In that moment, I learned two things.

All my classmates stared at me, because they, too felt I should have the answer. Instead of facing the truth and deciding for themselves, as human fucking beings, whether it was wrong, they needed me to say it was wrong. Because they couldn’t, or because they wouldn’t. I’m not sure. Either way, that’s the first thing I learned. There is an expectation that any (and every) black person represent all black people. As if we’re one and the same, a singular entity in many bodies, all feeling and behaving and existing in conformity. They expected me, their black classmate and friend, to somehow remember, and to explain. How it felt to be whipped. Chained. Oppressed. They expected me to speak for us all. They expected me to know exactly the right words to say.

If I could’ve disappeared, I would’ve left the moment my teacher pressed play. But there I was, the center of attention in the aftermath. I cleared my throat and sat up taller in my seat, searching for something, anything, to say. But the thing was, I didn’t know how I felt about what we’d watched.

“May I have a bathroom pass?” I squeaked, and ran from the room before anyone could stop me.

Funny thing is, nobody even tried.

And that’s the second thing I learned that day. Nobody knows what to do about slavery. We want to forget, pretend it never happened, but we can’t. Growing up, it felt like white people needed black people to forgive them for slavery. To tell them it was okay. But even though they needed that forgiveness, they couldn’t give us anything in return.

Instead, we were left with the memory and pain, all on our own.

We were expected to own the consequences, although nobody would own the actions.

Slavery was our tragedy. But we were not allowed to grieve… 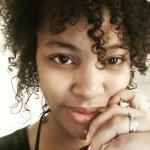 Kai Harris is Rabble Lit’s “Black, I” writer and editor. She is a college English instructor, and a soon-to-be PhD candidate in Fiction at Western Michigan University.